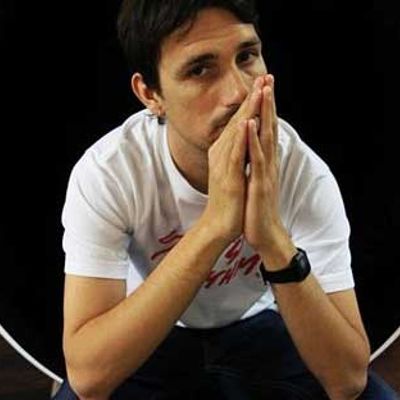 Italy, Roma
Dj and producer from Rome, founder of the almost 15 years old L-Ektrica party, co-founder and artistic director of Spring Attitude, resident of the massive underground house party Loaded at the Rashomon Club, he released some music on Frontroom and Relish.

As a child, he was dreaming to be a footballer, maybe one wearing the purple shirts ad socks of his favourite team Fiorentina, and re-enacting his heroes’ deeds. Still, never managing to go over the 15 consecutive dribbles inevitably brought about some doubts: apparently, football was not his destiny. Any alternatives? Well, at home there were some Beatles’ collections (the red and blue ones, you know), and nobody would deny the use of a record player to a 8-years-old. Moreover, a ten-years-older brother (Fabrice, incredible dj) can come in handy, or let’s say fundamental, in the discovery of, and the passion for, new music.

Brought up on bread, Beatles, The Smiths, XTC and Depeche Mode, Andrea very soon started to feel a fascination with the early 90s indie scene worldwide, getting to appraoch electronic music through such stuff as Madchester, Hacienda’s 24hourspartypeople, Screamadelica, and the Stone Roses. In the mid 90s, he started selecting music for some indie clubs in Rome, and soon after came the purchase of a couple of dusty technics 1200, together with the first rudiments of filtering and mixing, the discovery of seminal artists from Chicago’s house scene, and the fever of vinyl record collecting.

In 2002, he founds L-Ektrica, a masterpiece of costancy and musical quality, which in almost 10 years’ activity has grown to become one of the leadingparties in the european underground electronic dance scene; since 2006, also keeping the residence of Loaded at Rashomon Club, one of the best italian underground parties as far as house & techno are concerned.

In his already long career as a dj, as eclectic and polymorphic as an early Rui Costa, Andrea has been lucky enough to play some of the best clubs around Italy and Europe, from Paris to Milan, from Berlin to Amsterdam, via London and Antwerp.

Andrea released his music so far on the british label Frontroom and the german Relish.