FOTONICA from photon, historically as light, from Greek φωτός (photòs), is a festival that investigates art forms related to the light element, in particular digital light.

FOTONICA wants to be a new project in a field where Rome has always been a reference, but today it suffers from the lack of an international event: the Audio Visual Arts.

FOTONICA wants to be a project of the newborn roman network of organizations active in contemporary video audio to build a program that represents the various forms of expression:

FOTONICA is produced by Flyer communication, which in 2004 created the LPM Live Performers Meeting, the largest event in the industry. He came to his 18th edition, of which 11 in Rome and the others, thanks to the support of the European Community, Xalapa, Minsk, Mexico City, Cape Town, Eindhoven and Amsterdam. Since 2004, LPM has hosted more than 4600 artists, 2625 performances, workshops and showcases, with 72 participating countries and more than 1,500,000 visitors.

FOTONICA was part of LPM 2015 > 2018, a project co-funded by Creative Europe, a program of the European Union that aims to promote Visual Visual Arts Digital through a joint project of 13 partners from 12 countries with the production of 36 festivals, 3 meetings, 3 Audience Development Conferences and over 200 satellite events. 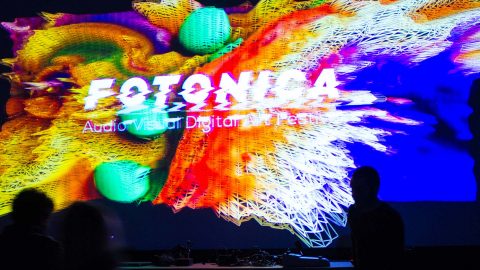