A small particle, but able to give rise to all forms of light: the photon is the smallest and brightest fragment of the universe, of microscopic dimensions but of enormous and multiform creative power.

Fotonica is the festival that investigates art forms linked to light phenomenon. The festival comes back in full form, for its fifth edition, based in two new locations, CityLab 971 and Fusolab 2.0, attending numerous artists from all over the world.

After last year’s digital edition, which had seen the creation of a parallel virtual universe in which to enjoy the festival’s activities, for 2021 FOTONICA finally comes back in full form! 2021 marks the fifth edition for Rome’s FOTONICA Festival, a unique event in the panorama of Audio Visual Digital Arts, which investigates all those art forms in which the element of light is central, presenting for years the best experiences in the international field and contributing to the creation of a network that brings together the most important artists from all over the world. The event, promoted by Roma Culture, is the winner of “Contemporaneamente Roma 2020 – 2021 – 2022”, promoted by the Department of Cultural Activities, and it’s organized in collaboration with SIAE.

“Fotone” is the smallest particle of light, with an enormous and multiform creative power, and starting from this concept, FOTONICA takes shape as a festival that focuses on the universe of digital art, with a rich selection of Italian and international artists that presenting their creations. This year, the event will take place between November 19th and 27th in two new locations, CityLab 971 (Via Salaria, 971) and Fusolab 2.0 (Viale della Bella Villa, 94), located in Rome’s “peripheral” spaces, to stimulate a more lively dialogue with the social fabric and the new generations who inhabit those places.

FOTONICA will bring over 20 carefully selected artists to its stages, that will present their works through installations and live performances, exhibitions, lectures and workshops. Among the most significant events of this 5th edition, on November 26th will take place the italian preview of “FIELD”, the performance of the Canadian artist Martin Messier, in which the protagonists of the work are the sound signals generated by the electromagnetic fields present in the environment. On the same night, the two long-time artists Luca Spagnoletti and Andrew Quinn (Australia) will present the international preview of “Il Giardino Magnetico”. Festina Lente and La Roboterie are the Roman-based collectives that will host both Saturdays nights – on November 20th and 27th – with a  selection of performances and live A/V, which will see among the guests (on Saturday 20th) also Federico Nitti, Italian vj-artist internationally acclaimed, who has also worked with Aphex Twin and Terry Riley in recent years. During the opening night of the festival, on Friday November 19th, the English artist Chromathouch will present the a/v performance “Postmodularism”, created with modular and live coding, citing Deleuze and Guattari and their “Mille Plateaux” book. Following, FOTONICA will host the opening party night with the visuals of PuttyRubber from Bristol and the music of MarkT and Michael JS.

Organized in collaboration with Shockart.net, it is possible to visit the web-art exhibition “El Mundo Nuevo”, dedicated to the new languages ​​through which creativity finds today an expression and on which it bases its own revolutionary communication codes. The Spanish collective Darklight Studio will curate the exclusive video mapping “Sacred Geometry”, a journey into the world of philosophy and ancient mathematics, while the Hungarian collective Photon will present the installation “SOL.AR.IS”, a virtual space in where the public has the opportunity to interact in real time with ephemeral 3D objects inspired by the homonym science fiction novel.

The space dedicated to practical approach and discovering of the world of digital art has always been central to the festival program, which allows different audiences (students, families and children) to approach the festival using tools and creative stimuli. Among the workshops that will take place during this edition: “Touch Designer Intermediate” by Andrew Quinn, “Video Mapping” by VJ EletroIman from Telenoika collective, “MusicUpNose – Interactive Concert for children” by Andrea Marinelli and “Video Mapping for kids” by Gianluca Del Gobbo .

FOTONICA Festival is produced and organized by Flyer, which since 2004 has given life to LPM – Live Performers Meeting, the largest international event in the Audio Visual Performing Arts area, and since 2014 has produced Live Cinema Festival, the only international festival dedicated to this new form of audio-video performances.

FOTONICA counts among its numerous partners various local and international networks including AVnode, a network of organizations and artists active in the field of AV performances, and PAC (Contemporary Performing Arts) formed as a result of collaborations between various cultural entities operating in the territory of the city of Rome. 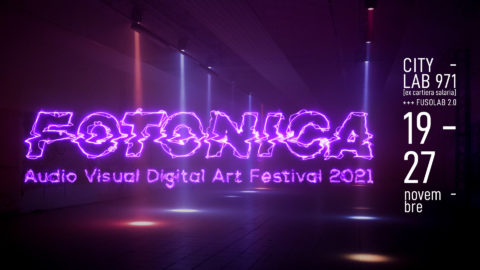